View the City's 1899 Code and Charter 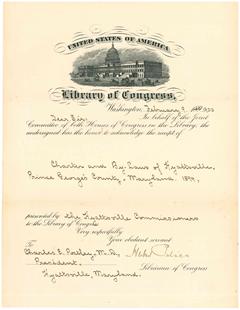 View the City of Hyattsville's complete 1899 Code and Charter.

A Brief History of Hyattsville

Hyattsville’s history reaches far into the past with archeological record indicating nearly 8,000 years of human inhabitance. Algonquin- and Iroquois-speaking Indians resided here in the more recent millennium. The first European exploration came in 1608. Animal resources, primarily beaver, were a strong attraction and hunters could transport easily their hides along the area waterways and American Indian trails. Watch a short video about the history of Native and European settlements in the Anacostia watershed from Maryland Milestones.

European settlers made land purchases in the area in the early 1700’s, calling these tracts Black Ask and New Dumfreeze. On John Beale’s Black Ask parcel, a small riverfront community formed, commonly known as Beale Town. By 1742, the residents petitioned the Maryland provincial legislature to move south because of dissatisfaction with their community’s location and economic development. Beale Town ceased to exist, but a few families remained on their individual properties.

In 1783 the first American stagecoach route passed through this area, followed two years later by a postal delivery route. With settlement came farming; the local soil and slavery made tobacco production popular. Maryland authorized construction of the Washington and Baltimore Turnpike connecting the two cities via the Hyattsville area in 1812.

By 1828 the Baltimore and Ohio Railroad was chartered, its Washington Line connecting Washington, DC, and Baltimore in 1835. Christopher Clarke Hyatt purchased his first parcel of land here March 19, 1845. Hyatt opened a store and began mail delivery, officially naming the nascent community “Hyattsville” in his 1859 application to become postmaster. This ideal location at the intersection of the turnpike with its stagecoach line and mail route and the railroad with new telegraph lines alongside made the land perfect for development.

The end of the Civil War and slave-based economy forced the breakup of many of the larger plantations. The sale of this cheap land coincided with a booming federal government expanded by the war and a rise in property prices in Washington, DC. Neighboring Bladensburg’s Spa Springs, a resort, created a draw with its “healing” waters. Hyattsville’s location on the railroad made it a prime location for summer homes and a suburb.

Local residents, like Benjamin F. Guy, Thomas Parker, and Jeremiah Bartholow, joined Hyatt in subdividing and selling a small number of lots, while Washington, DC, developers Louis Wine and George Johnson sold lots on a large scale. Hyattsville’s population doubled. The Act of Incorporation for the City of Hyattsville was signed April 7, 1886. By 1890 Hyattsville was one of only two cities in Prince George’s County with a population greater than 1,000. Churches, schools, athletic groups, and civic organizations formed in reflection of the growing community. A small immigrant and African-American population made Hyattsville their home from its earliest days. In 1892, Hyattsville gained international fame when it became the first American city to institute the single-tax system, taxing only land and not personal property. The ensuing court decision provides standing for today’s tax code. The city also boasted the area’s first newspaper, phone system, and utilities. By 1893, the electric streetcar connected Hyattsville to Washington, DC, businesses, boosting the population ever higher.

Hyattsville as streetcar suburb was influenced early by the automobile. The Carter Motor Car Corporation located a factory here in 1908, producing a hand-built twin-engine automobile. A national women’s suffrage rally left Hyattsville via motorcade to petition the United State Senate July 31, 1913. Service stations, garages, auto dealerships, and tourist homes lined the city’s main thoroughfare. Some 6,000 vehicles traveled daily through town in 1925 when Hyattsville’s main road, Maryland Avenue, was federally designated Route 1, part of the main road from Maine to Florida. Hyattsville’s prominence in Prince George’s County was affirmed with the establishment of headquarters for the regional Washington Suburban Sanitary Commission and the County Government Services building, locating here in the 1930’s.

By the mid-1950’s, Hyattsville began to look much as it does today. An area-wide street-name change in 1941 erased the nod to early inhabitants. With the closing of the streetcar line and the opening of regional bus service, the older shops struggled. Housing and retail development like Prince George’s Plaza shopping mall and Northwestern High School claimed the surrounding farmland where truck farms once supplied residents with fresh produce. Early efforts to preserve Hyattsville’s historic buildings began in the late 1970’s. Homeowners formed a preservation association and documented the Hyattsville Historic District which was listed in the National Register of Historic Places in 1982 with nearly 1,000 buildings of vernacular Victorians, Colonial Revivals, Sears homes, and Arts and Crafts influences.

Hyattsville, at first glance, may be seen as a typical Washington, DC, suburb, with growth spurred by the railroad, streetcar, and automobile. However, its prominence in Prince George’s County was earned by its many firsts and innovative residents whose optimism and ingenuity make Hyattsville’s history unique. 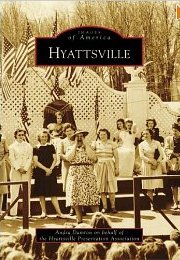 A very special thank you to Hyattsville history author Andra Damron for this summary, and her efforts to preserve the history of the City. Andra's book is available through Amazon and other retailers.

Thanks also to Doug Dudrow and Jim Groves for their work to preserve the City's history.

For more information on preservation work in the City, please visit the Hyattsville Preservation Association.

View a slideshow of Hyattsville memories submitted by community members in celebration of the City's 135th anniversary in April 2021.