In 2018, the City of Hyattsville commissioned a study to develop a comprehensive plan to improve existing transportation infrastructure, carry out new projects, and determine priorities for the next 20 years. You can review the Hyattsville Transportation Study's final report.

The City of Hyattsville has access to a wide variety of transportation options.

The City is located on WMATA's green line, and two stops are within City limits - West Hyattsville and Prince George's Plaza. From these stops it is less than a ten-minute ride to some of Washington, D.C.'s, prime neighborhoods for entertainment and work.

The City is served by more than a dozen bus routes. For route schedules, please search the bus route you are interested in. If you need assistance, please call us at 301-985-5000.

The City's Call-a-Bus offers seniors and people with disabilities transportation to medical appointments, pharmacies and grocery stores within a six-mile radius of the City. The bus offers curb-to-curb service from outside a resident's home to their destination Monday-Friday between the hours of 9 a.m. and 4:30 p.m. The fare is $1 each way and registration is free. Reservations must be made 24 hours in advance by calling (301) 985-5000.

Route 113 of the University of Maryland Shuttle Bus loops through Hyattsville, stops at the Prince George’s Plaza Metro, and then heads to the University. Hyattsville residents can get a pass to ride this bus and all the UMD Shuttles routes FREE by bringing photo ID and proof of residence to the City Building, 4310 Gallatin Street, Monday through Friday, 8:30 a.m. – 5:00 p.m. Passes are issued the same day. Route maps and schedules are available at www.dots.umd.edu.

Numerous taxi and rideshare services operate in and around the City.

The City is also near the Riverdale MARC train stop. The stop is on MARC's Camden Line, which travels from Baltimore to Washington, D.C.

The Bicycle and Pedestrian Improvements project is made possible through a $110,000 Maryland Department of Housing and Community Development (DHCD) Community Legacy grant.The plan is based on the March 2008 Bicycle and Pedestrian Master Plan developed by the City’s Bike and Pedestrian Safety Committee.The Committees' recommendations focus on creating a bicycle and pedestrian network connecting the City’s residential and commercial corridors.Fall 2012In Fall of 2012, the City began installing bicycle racks at parks, schools, public buildings and within commercial corridors.Spring 2013In Spring 2013, the focus shifts to creating an on-street network of bicycle lanes and pathways. Effective way-finding signage will guide visitors.Planned Routes 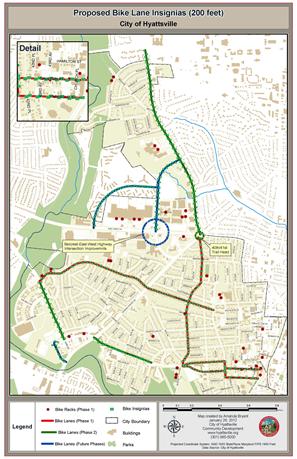 The engineering plans are complete and are detailed in each of the four plans below.Route A – 40th Avenue & 41st AvenueRoute B – Nicholson StreetRoute C – Hamilton Street & Gallatin StreetRoute D – Gallatin Street and Farragut StreetFall 2015In Fall 2015, the principle stakeholders of the City's Sustainability Plan envisioned a community where greater connectivity and access for bikes and pedestrians have been established, barriers to bikes and pedestrians particularly along Queens Chapel and East West Highway—have been eliminated, and pedestrian and bike safety have been successfully addressed. They identified a strong bicycle network as a necessary ingredient to the continuation of the successful redevelopment along U.S.-1 and as a link for community’s continued prosperity in attracting and incubating small local businesses. As a part of the Neighborhood Revitalization Application, the city applied for the Community Legacy grant which awarded $15,000 towards capital bikeshare. View the map of the capital bikeshare locations in the City.